Skip to Content
0 shares
If you’ve seen my blog post on ixl math, you know I really like the program and had previously purchased a one year subscription for my daughter. I have since purchased another year subscription. My biggest draw to ixl is it’s completeness skill wise. You can see very clearly all the math skills for that grade level and which ones your child has learned and has still to learn. However, despite how much I do appreciate this program, there are still 2 things I wish were different.
The first is that to make use of their ipad app, I would have to use wifi internet. For health reasons, our family has chosen not to have wifi internet at our house. The second con is the price. As a single stay-at-home mom I have to make sure to buy smart. With that goal in mind, I am not a huge fan of yearly subscriptions. I like to buy once and know it’s been purchased.
With that in mind, I have found another math program for my daughter that uses both the computer and / or ipad / iphone app. It’s called Splash Math.

For us, the fact that we can use the app without wifi is invaluable. Health reasons aside, there are many other perks to not having to depend on wifi. My daughter can do math on the ipad no matter where we are. It doesn’t matter if we’re camping in the bush, driving in the car, or visiting my grandparents who don’t have internet, the app is always available for her. We did have to use the wifi the first time to log on, but I only had to have the wifi on for a second and then it was done. One consequence to not using wifi is that you don’t get all the performance reports as you are not hooked up to the online world. However, that’s just a minor sacrifice I’ll gladly accept for the ability to remain unplugged.
For the regular user, your child can play Splash Math on the computer or the ipad app interchangeably using one login as they are synched across platforms. You would also get the performance reports so you can see what skills your child needs to work on.
The second big perk of Splash math in my opinion is the price. They have switched to a non subscription one time affordable price. Each grade level app is $9.99. And they have one app that has grades 1 through 5 for $29.99. I like the buy it once and it’s yours mindset. And you can try it out free, it’s free to register your child and they will be able to do 20 questions a day free.
I haven’t tried every single grade level app, but I have bought the Kindergarten app and the Grade 1-5 app so will comment on those. The Kindergarten app is really good. I like that the questions are more random to keep it interesting for my daughter. It’s colorful and engaging so my daughter thinks she’s playing a game. And the questions are read to the child which means largely she can do this app by herself.
In the multiple grades app, the child chooses which skill to work on. I prefer the randomness of the Kindergarten version but it’s still a great learning tool. The child gets a coin for every question answered correctly and then they get to spend them at a cost of 20 coins per prize. The questions of the Grade 1-5 app are also not read to the child but will no doubt be added on a future upgrade.
Every day, my daughter does 20 questions on the Splash Math Kindergarten app, and then another 20 questions or so of Grade 1 on the Grade 1-5 app. It takes her only a few minutes on each app and she has done 40+ math questions each day. All this practice has greatly helped her and her math abilities.
As a recap, both Splash Math & Ixl are educational programs that make it fun for little ones to do math. And they both can be played either on the computer or app, or both. My daughter uses both programs, as they both have their pros and cons, and they’re different. For it’s price and ability to play offline, Splash Math can’t be beat! 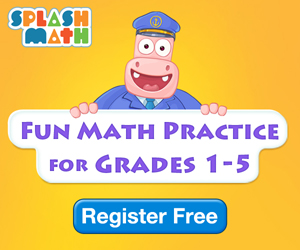