Skip to Content
129 shares
I honestly don’t know how I stumbled across this type of mental math.  Then I watched YouTube video’s of kids calculating in their head faster than you could find the answer using a calculator and I was intrigued. 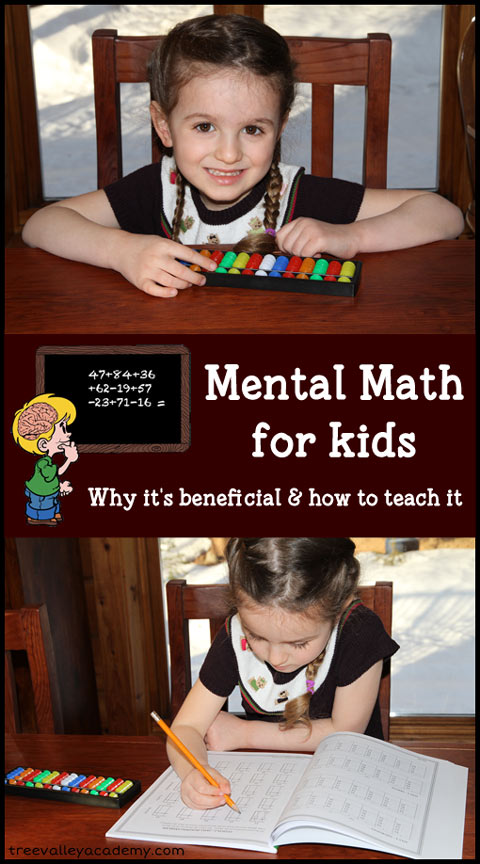 It’s basically using an abacus to do calculations and then gradually learning to visualize the abacus in your head.  There are various types of abacus’.  One type is called the Soroban 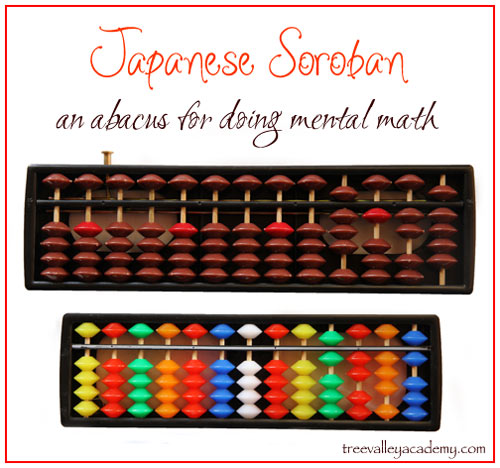 was developed in Japan and means “counting tray”.  It’s widely taught in public schools in numerous countries around the world.  I really believe that this type of mental math should be part of the standard core curriculum of schools in Canada and the US as well.

Math calculations are normally performed using the left side of the brain.    The left brain is more of the analytical, logical, rationalizing, sequential thought side. Reading, writing, calculation and logical thinking is done by the left brain.  The left brain is also auditory, it thinks in words or numbers.  So when we do math with calculations as taught in school, we are repeating whether in our head or out loud, the words of the problem.  For example “seven plus seven equals fourteen”.

Using the soroban for mental math is math using your right side.  The right brain thinks in pictures and is our artistic, creative side.  Our right brain is much faster than the left side.  It can take in several bits of information at a glance and process them into one overall thought. 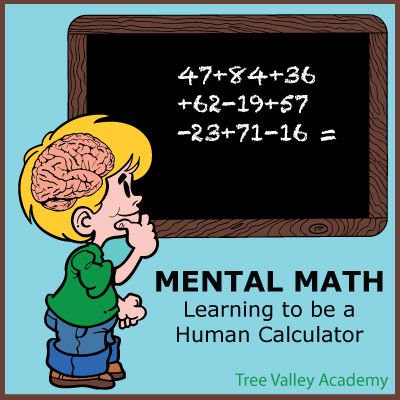 How To Learn Mental Math

There are various ways kids can learn this right brain type of mental math:

At least where I live in Canada, mental math with a Soroban

is not part of the curriculum of public education.  So I did some googling and found there are classes parents can pay to have their child attend.  The classes I saw were about 2 hours per week.  Finding mention of price tho is difficult.  They invite you to attend a seminar where they no doubt try to sell you on all the benefits so you will more readily agree to pay their fee.  I’m already sold on the benefits, just not the fee.

For one child, the place I looked into was over $100 a month when you include tax. Doing some calculating, it would cost about $3,215 for the first 30 months.  And $3,700 for the remaining 36 months.  That’s nearly $7,000 for one of your children to learn this skill.  I only have one child and being a single mom, I would have difficulty shelling over $1,200 a year for a math class.  If I had more kids tho, the price would definitely be out of the question.  Each additional child you can add $6,255 or an additional $1137 a year.

So learning via a class is far too expensive at least for myself.  Also, I know this is about homeschooling children, but I really wanted to learn as well.  There must be a better cheaper way.  Fortunately there is…

There are some YouTube video’s with downloadable worksheets from the HEV Project.  There are 33 videos.  I’ve only watched the first few so far, and they are pretty thorough, but probably dry for younger audiences (even older audiences lol).  It is a free way for a parent to learn from so they can then teach their child.  And you don’t need to watch the whole thing at once, just make sure to stay a step ahead of your child.  Here’s the link to the first lesson: https://www.youtube.com/watch?v=SkUdjlQy3rk

If you have an ipad, there are 2 apps that I’ve found that are really good.  I’ve tried everyone I could find (the free ones anyways).  Some of them have a good concept but I find the beads on the abacus much too small to be comfortable.  The other ones are too buggy or complicated or well not that great.  The 2 I really like are: 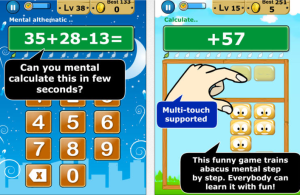 It’s $1.99, and I feel very worth it.  Never mind my daughter, I’m totally addicted to this game! 😛 I completed all 55 levels several times now.  The idea is that you’re climbing a level at a time to save the princess at the top.

The beads are large enough to be comfortable to slide up and down, which is really important in my opinion.  I enjoy sliding them up and down and figuring out what to slide where.  I’m always bummed when the questions of each level are up.  (Ok I guess I just exposed my secret that I sort of love math lol).

Some of the levels are mental calculation without using an abacus.  They’re not really my favourite, as far as fun goes, but I guess they are an important part of the ultimate goal.

There are instructional parts weaved in as well but I don’t find they’re very easy to learn from.  But if you can learn from other sources, then this is a great game for practicing.

As far as my daughter goes, she loves doing it as well and didn’t take long to pick up the basics.  I used to sit beside her when she was doing it to help guide her as to the best fingers to use etc.  Now she does fine largely on her own.  I try to limit her to no more than 10 minutes in a day to make sure her current enthusiasm doesn’t wane.  She’s not the best at the visualization part yet.  At first I would just do those levels for her so she could move on to the next regular level, but now that all our levels are unlocked, she jumps around to whatever levels she chooses.  She’s still young so I’m not expecting her to complete the game until she’s ready.  And, I have no issues with her repeating easier levels as many times as she likes until she’s ready to tackle a harder level.

This app is free and from the same developer as Abacus Adventure 1 – EverQuiz.  It’s basically a 4 column abacus that you can use to practice with.  It obviously has sound as the name implies but there is a mute button to turn that feature off.  I like it because again the buttons are nice and big and easy to use.  It’s not a game but still a great app.  You can also use it just to see what each number looks like on the Soroban.

There are some great instruction books

that would make a great addition to a homeschool curriculum.  My daughter and I are currently enjoying going through this series.  If you’re serious about your child learning this math, these books are great.

In a later post (when we’ve completed the series) I will include a full review, but so far so good.  My daughter is 5 (close to 6) and to date has been enjoying her daily mental math practice.  She loves using the soroban to find the answers.

Each level has an instruction book that is like the teachers manual.  It’s broken down lesson by lesson and is a great tool for parents to learn this type of math themselves and how they can best teach it to their children.  The lessons are all prepared for you, full of colourful images and step by step explanations.   And the instruction book can be used when teaching each lesson to your child.

Each workbook is broken into daily sections and contains 10 weeks worth of daily math problems and mental exercises.

So there you have it! So many great ways you and your children can develop your mental math ability.

I need an advice for child training to solve exercise has 5 numbers tens and ones per 3 seconds...how I can

Hi, Love love love your tutorial. My only question about the abacus is, can kids do mental math without it in school?

Thank you Lopa. To answer your question, there are many ways to do mental math, some are faster than others. This post was about this specific way of doing mind math using the soroban. Kids initially learn with the abacus, but the idea is for them to gradually use the abacus less and less, as they learn to visualize the rods and beads of the soroban in their head. At some point, they would not need a physical abacus at all.

Mental math is super important. Thanks for sharing these amazing resources. I will have to check them out.

Great info! Thanks for linking up at Bookshelf