My daughter was able to complete almost every math skill at the Kindergarten level without too much effort.  But there was one major skill that she struggled with – money.

Rather than frustrate her with learning something she wasn’t ready for just yet, we left the money section incomplete for the time being and moved on to Grade 1 level math.  And no surprise, one of the last topics to be completed in Grade 1 was once again, money.

Learning to count nickels, dimes, and quarters or any combination of coins was going to require some visual aids.  And what could be more fun than using LEGO’s!

.  If you have a LEGO sorter

it makes the search process much faster.

I asked my daughter to make groups with 5 LEGO 1 pieces of the same colour in each group.  Afterwards, we took 4 colours that had at least 5 groups per colour, and put the rest away. 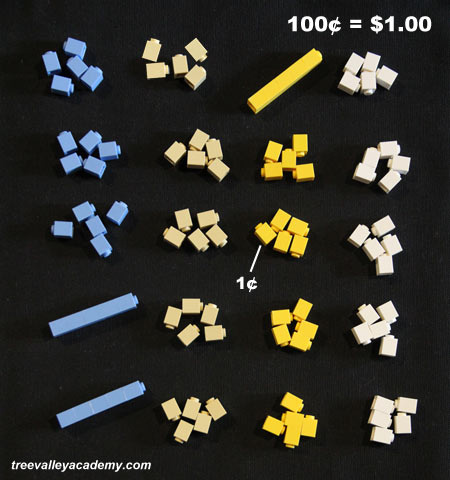 Pretending that each piece of LEGO represented 1 cent, I showed my daughter the concept that there are 100 pennies in 1 dollar.  But we can group these pennies in many different ways and turn them into different coins.

So to further help demonstrate this, I asked her to stack the LEGO’s in each group.  I let her do this part by herself as I wanted her to really have it ingrained that each little stack of LEGO’s she created was made up of 5 blocks.  And so each group of 5 “pennies” got changed into “5 cents” or a nickel.  Nothing was added or taken away, 5 pennies was the equivalent of 1 nickel. 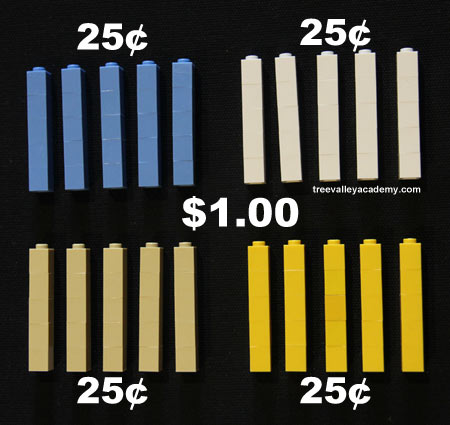 Learning about quarters was next.  I asked my daughter to group the “nickels” by colour.  Since there were 4 colours and she knows a quarter is one 4th of something, I told her each group of LEGO’s by colour represented one quarter.  She knows how to count by 5’s so the next step was counting by 5’s the amount of cents in a quarter.  She came up with the answer: 25¢.

“How many quarters are in a dollar?”  She can visually see that there are 4.

“How many quarters would be in half a dollar?”  It’s very easy to visually divide the LEGO’s in half and see that there are 2 different colour groups.

“How many cents are in 2 quarters?” Counting by 5’s she arrived at her answer.

“How many nickels are in a quarter?”

After practicing counting by quarters we were ready to tackle dimes. 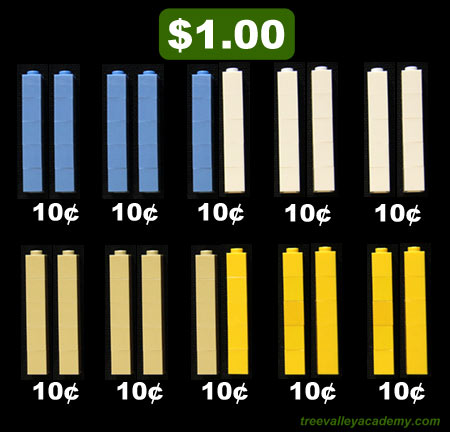 The idea that 2 nickels had the same value as a dime was a concept she easily grasped with the visual aid of the LEGO.  Grabbing 2 LEGO stacks at a time, we counted by 10’s to see how many dimes were in a dollar, 50 cents and even a quarter.

Then I would take random amounts of LEGO stacks and possible single LEGO 1 pieces and ask her to count them.  I told her to group them by coins first, and to count the bigger coins first.  So if there were 5 stacks in the same colour she grouped them right away as a quarter.  I told her to count all quarters first, and then she could grab 2 “nickels” at a time to continue adding by 10’s, and finally any left over nickels, followed by pennies.

This simple visual aid of LEGO helped her easily understand this concept of money.  I don’t think she fully understood before how 5 coins that were nickels could be equal to 1 coin that was a quarter, but now this made sense to her.  And as an added benefit not only did she understand but she now easily remembered how many coins equaled another coin.

After we could put the LEGO away and begin counting real coins.  The concept was the same, so actually it went pretty effortlessly.  And since she conquered this math skill now, she flew right through her worksheets on money. 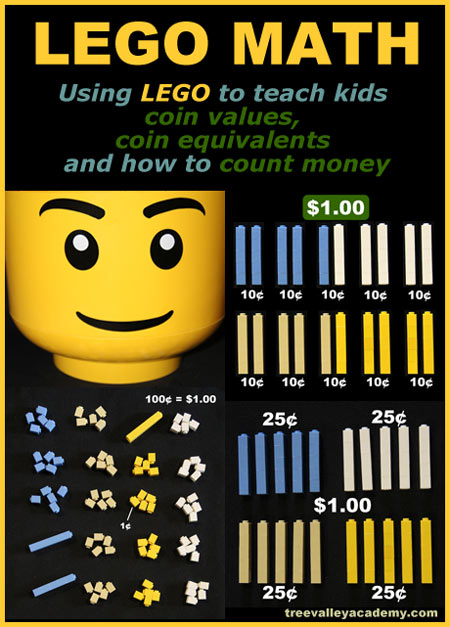 What a great activity! Thanks for linking up at the Thoughtful Spot Blog Hop! :)

Hi! I love this idea! We're working with money for our second grader and this is a fabulous way to do it!

Thanks for the linking up with the Laugh and Learn Linky!