Several years ago I struggled with an important decision for my daughter’s educational future.  I searched for answers from the wisdom and experience of those before me, but struggled to find such answers.

Why am I sharing this with you?  Because, if I could go back in time, this is what I wish someone would have told me.  To be able to learn from the mistakes or successes of others makes decision-making much easier.  And so now I share our story with you. 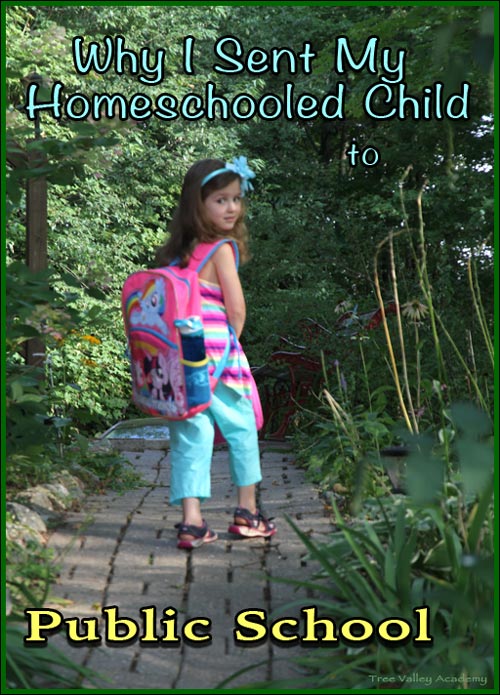 From the time I knew I was pregnant with my daughter, I thought about what I wanted for her education.  The decision to home school came easy.

Another area of high importance to me was that my daughter could learn various foreign languages – the most important being french.  Here comes the problem.  While I do understand and speak some french, I am not fluent in the language myself.  How was I going to teach my daughter french?  Homeschooling french would definitely be a huge challenge.

We live in an area (Quebec, Canada) where french is the language of the majority.  You might be thinking, oh well that solves that, she’ll naturally just pick it up, but not true.  I know plenty of english speaking kids in the area, that grew up, without ever learning the language.  It’s natural segregation, french kids usually play with the french kids, and the english kids play with their english friends and go to english schools.  I did not want my daughter limited to who she could be friends with, and which  activities in the area she could participate in.

An easy answer would be to throw my english daughter into a local french school.  That’s how almost all the english and other language children who became bilingual learned the language.  But putting my daughter in school is the very opposite of my wish to home school.  What to do!

Fortunately, since kids don’t go to school till they’re 5, this is not something I had to decide immediately.  I had time to try some other ideas.  I enrolled my daughter in french taught dance classes, gave her play dates with french-only speaking children, let her watch french tv shows, and dabbled with french curriculum, but something more was needed.

I reached out to so many online forums and local homeschooling communities asking for advice on how I could teach my daughter french without sending her to a french public school.  I was given the advice of hiring a french tutor.  The average rate I was quoted was about $20/hr.  The thing is I’m a single mom living on a limited budget.  Learning a language is not something that can be done in a small amount of hours, so the cost of this method was out of the question.

Besides, it’s not the way I believed was ideal to learn a language.  I studied french for many years in a classroom setting with text books and tests.  The result of all my hard work is I’m pretty good at grammar and can conjugate a verb, but I am nowhere near as fluent as I would have hoped for all the effort that I put into it.  Learning to speak a language doing worksheets at a table is far from the effortless and natural way a child learns their mother tongue.  So this did not seem like the answer to me.

The only thing that seemed like it would actually work was to immerse her in the french language, which financially my only way of doing that would be to put her in a public school.  I was forced to decide what was of more importance to me – my daughter learning a language or homeschooling?

I can’t even tell you how many nights I stayed up googling any information I could find on the subject, or how many people I talked to.  I wanted to know if I chose this route how long I would have to leave her in school for before she was able to speak the language.  I had so many questions, but not a lot of answers to be found.  I had to make a decision more or less on a blind leap of faith.  But it was even more complicated, because if I chose to put her in school, there would be possible consequences to this action.

There were 2 very big downsides if I chose to put my daughter in school:

Firstly, many homeschoolers in the area advised me against putting her in school if my endgame was to homeschool.  In Quebec, registering with a school board presents very little, if any, advantage to a homeschooling family, and instead opens you up to a mess of paperwork, red tape, and potential problems dealing with uncooperative school boards.  This would be a huge con and one I’d really have to consider.

Reason #2: At 5 years old, my daughter was at a various levels depending on the subject, but on average at a Grade 2 level.  Since public school is a one size fits all approach, she would be put in Kindergarten at a public school.  I struggled with this one.  It felt cruel to my daughter to make her start at the beginning again.  And I knew she would be bored.  I told her, if the kids are learning the alphabet, you’ll just learn it in french.  But, it was a lot to think about.

To help me, I met with the principal at the local school.  I did not tell her about homeschooling, etc.  I told her my english speaking daughter was at a Grade 2 average, although emotional or socially she was at her age level…..and she did not speak any french.  I asked if the school would let her start at Grade 1, even tho age wise she should be in Kindergarten.

The principal was nice.  Her advice was to start her in Kindergarten and give her a chance to learn the language in an easier setting – basically while playing.  The following year if I wanted they would put her in Grade 2.

Her reply was that Grade 1 & 2 were very similar, and then repeated her advice to do Kindergarten and then jump to Grade 2.  This discussion was very informative and gave me some more to think about.

My biggest reason for choosing homeschooling is to give my daughter a great education – an education that would prepare her for a successful post-graduate life.  So if public school education could give her a better education than I could in a subject, then I would have to change our course – a detour.

And, as the principal told me, she would get special one-on-one french help.  A teacher that would help her with the language 2 or 3 times a week.  I could never afford that kind of private instruction for her on my own.

Not to mention, young kids brains are wired to learn language.  There’d be no better time in her homeschooling career than now to learn this language…the earlier, the better.

And at kindergarten age, she’d learn by playing – the most natural way I can think of to absorb a language.  Later school years kids would be largely required to sit and work quietly…not very helpful when trying to practice a language.  There was really only this one year window to take advantage of this total french immersion opportunity where kids did not get in trouble for talking.

Learning this language would benefit her in so many ways.  For example, there are many jobs in Canada that require the applicant to be bilingual (both english and french).  So if I gave my daughter the gift of learning the french language, I am opening future doors for her….she will have more options!

Being bilingual will also give my daughter more friend possibilities.  And she’d never have to be the odd man out, the one that doesn’t understand what’s being said, when she’d be amongst french speaking people.

It was now or never.  Plus, Kindergarteners get out early, and they mostly just play all day.  We could do our real homeschooling after a day of play, right?

So yes, last year I put my daughter in Kindergarten in a french public school.  Did she learn the language?  Was it everything I thought it would be?  Were we able to still homeschool at the same time?  Was it a good decision?  The good, the bad, and those questions answered in my next post about my daughter’s public school adventure to learn the french language.

I feel like it's an easier choice for me because I was in French immersion up until grade 6, so although I'm out of practice, I'm pretty sure I can handle teaching Kindergarten/Grade 1 level French. The problem is that I hated being in French immersion and have a lot of negative associations with French, and so I keep going through phases of wanting to use French for my kid vs not wanting to even think about French.

What an incredible opportunity to immerse her in a new language! I love that you thought so carefully through all the options and their pros and cons. Its obvious that you are a very caring and involved mother - and I know your daughter will excel wherever she is planted - with such a caring and diligent mom looking out for her! Have a great school year!

I struggled with homeschooling my youngest--it was like wrestling a lion every day. I would threaten every day, "Do you want me to just send you to school?" But, I couldn't do it. Then one day, my husband was there to see the battle unfold. And he made the decision that needed to be made.

The transition was filled with more tears. But, the dust has settled and it's been the right choice for that child. She's thriving in public school.

Glad to hear. It's good that we have the freedom to choose which educational choice we feel is best for each of our individual children, because every child and circumstance is so different.

It is such a hard decision. Between what we can offer in a one -one setting and a number of options from the public school. In a larger town with more homeschool groups I might have chosen differently but in the small Colorado town where I live the public school is about the only option for a lot of educational support.

It's so true, and I envy the parents whose school boards allow them to profit from the best of both worlds, and do part time schooling. That would be so much easier than having to make an all or nothing choice.