Homeschooling my daughter was a choice I made early on.  There was one problem with this decision tho that I wasn’t sure how to solve.  I wanted her to become fluently bilingual in both english and french.  And I wasn’t sure how I was going to accomplish homeschooling french since I wasn’t fluent in the language. 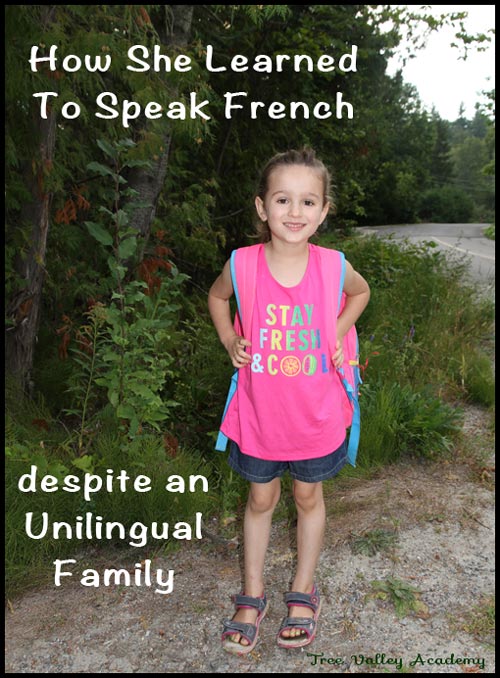 What I Tried In The Early Years

From the time my daughter was 2 years old, I enrolled her in regular, once or twice weekly dance classes, which were taught in french with french speaking kids.

My daughter learned some, but limited, french vocabulary.  She learned some action words like “jump”, and she learned the french words for some animals that they were to imitate in their dancing.

Since she didn’t understand much of the verbal instructions, too much of any kind of talking and she was bored.  Bored kids are usually the first ones to get in trouble.  It wasn’t uncommon for her to lose focus and start running around doing her own thing.  This usually led to the teacher using her name in a negative tone.

I believe hearing her name in a negative tone so much is probably one of the reasons she has asked me on more than one occasion if she could change her name because she doesn’t like it.

It was difficult for me to see her developing a bit of the label of “the problem child”, and worse her start to develop the same image of herself.  But this seemed to be the emotional cost to learning this language.

I also whenever possible welcomed play dates with french only speaking kids.

My daughter developed some great kid friendships.  In the early years, language differences did not seem to be a barrier to fun.  These kids would play together, and talk to each other like they each understood each other.  It was quite amusing to watch.  Some words they each would naturally pick up of the other’s language.  For example, one would say “come with me” and the other naturally learned what that meant they were supposed to do.

I didn’t really notice much negative.  My only worry was what would happen to their friendships as they aged, and language eventually got in the way.  It would be sad for these friendships to gradually cool off, if my daughter wasn’t able to learn her friends language.

Also, while this was unquestionably helpful, the occasional playdate was not going to be enough.  Much more exposure to the language was going to be needed.

Most days I put on a french tv show for my daughter.  Many times Dora The Explorer since english was the second language used in the french version of the show.

A bit of french tv didn’t seem to bother my daughter.  I’m sure more exposure to hearing the sounds was somewhat helpful, but don’t think by itself was that much help in learning the language.

As a regular to our homeschooling, I would give my daughter the iPad and let her watch a half hour episode of Little Pim.

I believe this was a positive in my daughter’s efforts to learn french.  But the episodes were too few, and in itself just not enough.  Something more was needed.

Sending Her To A French Public School

After much consideration, I made the decision to send my daughter to a french public school at the Kindergarten level.  Even tho she was at a more advanced academic level since she was homeschooled, Kindergarten was a good choice to jump start her language learning since a big part of Kindergarten is talking and conversing with friends.

Did it help her learn the language?

Well, the first term was difficult for my daughter.  She didn’t understand what was being said and many of the kids didn’t want to play with her because they didn’t understand her.  She experienced some bullying and often told me she has no friends at school.  Her first report card came back and my usually extremely social child got a D in socialization, and a couple of C’s, all due to not speaking the language.  It was a hard first term, and I had to daily remind myself why I chose this.

In the second term she often talked about a boy she played with at school that spoke english.  He helped translate for her sometimes and so she stayed as much as possible with him.  Sometimes they got along together, and sometimes they didn’t, but this was at least someone she could play with.  Since she played with him that meant she would sometimes play with his friends which were generally boys.  So her first friends at school were all boys.  Some of the girls were rather mean with her, and the other girls, weren’t mean but just didn’t know what to do with this kid that didn’t speak their language, so they just ignored her.

But my daughter was not going to give up quite so easily.  She is a communicator, I mean she likes to talk, a lot.  I banked on that trait when I decided to send her to school, and it did indeed help her out here.  She wanted nothing more than to communicate with these kids.  And at this age, she had zero shyness of making a mistake or saying something wrong, she was going to piece together words to get these kids to understand her.  And she did.

She would ask the teacher or her english speaking friend, “How do you say…..Do you want to play with me?”  And her language skills started to take off.

What Helped Her Learn French So Quickly

I witnessed her ability to speak french every time she was around a french-only speaking child.  It was quite incredible to hear her interacting and conversing with the kid in french.  Her french wasn’t perfect.  I do understand enough french to hear mistakes she made, but that didn’t matter.  She was now able to communicate with french speaking kids and they understood her.  And since my daughter is a talker, honestly when she’s with a french friend she just doesn’t stop.

I can speak french somewhat but I am always mentally searching for the correct words or trying to figure out the correct verb tense I need to use.  My fear of making mistakes and sounding stupid held me back from learning the language fluently.

In contrast, my daughter just talks.  She doesn’t care if she is using the wrong word and doesn’t know anything about verb tenses, she just wants to communicate with the kids.  And this is why her french learning progressed so rapidly.

Her ability to speak french was like a secret she was keeping from everyone except french kids.  I would tell people that she could speak french, but whenever a bilingual adult would try to converse with her in french she would just look at them with a blank stare.  What a kid lol.

Her improvements in the language were going much faster than I could have anticipated.  I was astounded by what she all accomplished in only 10 short months of Kindergarten.

Since success was achieved in months, I was curious how much more she would improve with another few months.  Although I really wanted to homeschool, in Grade 1 they really concentrate on learning to read in french.  So I decided to let her stay in school for Grade 1.

This proved to be a good and bad decision.  More on that in another post, but I ended up pulling her out of school after less than 3 months of Grade 1.  In those short 3 months, she did learn to read quite a lot of french words and learn a lot of french phonics to help her sound out words.  Her vocabulary also increased and she has quite the french accent.

Since we’re homeschooling again, it’s up to me to take the reins and continue her french learning.  Now her french dance classes, playdates with french children, and watching french tv shows will play a much bigger role.  And I will experiment with different curriculum and create some of my own to help her learn to read and write in french.

Follow my pinterest board “Learning French For Kids” where all my future french language learning printables and lesson ideas will end up.