This past week, my daughter and I tried out various offerings of the “Hour of Code”.  The following were our favourites for her age level.

We started learning with Anna and Elsa of Frozen from Code Studio.  The Frozen characters were great for getting my daughter hooked on coding right from the beginning.  It definitely helped tho that I was there with my daughter, as I was able to explain what the challenge was to her, and handle the mouse, as that is a skill she is still learning.  There were also some beyond Grade 1 Math skills needed to solve some challenges like simple division or some simple geometry like knowing how many degrees are in a circle, etc.  But those were things I could easily help her with, the actual coding concepts she was able to grasp.  She was able to explain to me what commands she wanted me to chose and in what order to get the Frozen character to complete each challenge.

Code Studio also has a free 20 hour course that’s for pre-readers ages 4+.  Kindergarten or Grade 1 students would benefit from this course as well.  My daughter has only begun it, but already I can see its value.  It starts with practicing dragging and dropping mouse skills, which is perfect for my daughter.  It definitely helped her improve on this important computer skill.  She will be working on this course over the next few weeks.

Tynker had some great coding challenges.  My daughter’s favourite beginning level games were “Candy Quest” and “Puppy Adventure”.  They had simple enough challenges for my daughter to be able to complete herself, and fun looking enough to keep her attention.  She had come to me a few times for help when she didn’t code something properly and needed help trying to figure out where she went wrong.  I usually just ask her what she needs the character to do, she tells me, and then we go through her code line by line.  Breaking it done for her like that, it usually becomes obvious to her what needs to be changed.

She also enjoyed the iPad app Kodable.  I asked her what she liked about it, and she said “that it’s easy to figure out.”  A voice tells them what to do, so there’s no reading skills necessary, and they are able to go through the challenges without much of a learning curve.

Daisy The Dinosaur iPad app was good for a short time.  There were only a few challenges, and then there was a free play mode.  The challenges were good, but it didn’t take long to finish them, and the free play mode didn’t hold my daughter’s attention for too long.  I think since it’s free, it was worth it to try, but I’m sure we’ll be deleting it in the near future.

Scratch Jr is a great free iPad app with plans on the way for an android version.  It’s marketed for ages 5-7, but with a bit of a learning curve even for me, an adult.  This one I had to sit down to try and figure out before giving to my daughter.  There’s a lot a kid can do with this.  My daughter understands a few of the codes, but you can tell she doesn’t understand them all.  She often throws random code together, to see what it does.  She likes this app tho as she can create characters, add sounds, change backgrounds, make them move, etc.  She has spent a lot of time on this app, and I can see her using this for a while to come.  My one wish with this app is that it had some challenges to introduce the code before letting them create with it.  I found out, my wish was granted.  On their website, they have several activities and lessons to go through which will help with the learning curve.

This next iPad or iPhone app – The Foos, Hour of Code Edition – almost didn’t make the list.  I sat down to try it out while my daughter was in one of her dance classes.  It looks fun, but the codes are pictures that I couldn’t always figure out what they were for.  I got stuck in one level as the character just wouldn’t go any further and in my frustration with this app, I dismissed it as too complicated for a preschooler.  I was wrong tho, it was only complicated for me lol.  My 4 year old daughter has figured out all the ins and outs of this game.  I’ve played it with her and she tells me step by step what I need to do.  There are 3 games with 8 levels each and she has finished all of them.  I am truly humbled.

There were many other programs and apps we had tried, but while they might have been great were a bit too advanced for 4-6 year olds.  Some of them were at her level, but just not engaging enough, or too big of a learning curve.

For more great ways for younger ones to learn to code and the benefits of them learning see Learning to Code for Younger Ones. 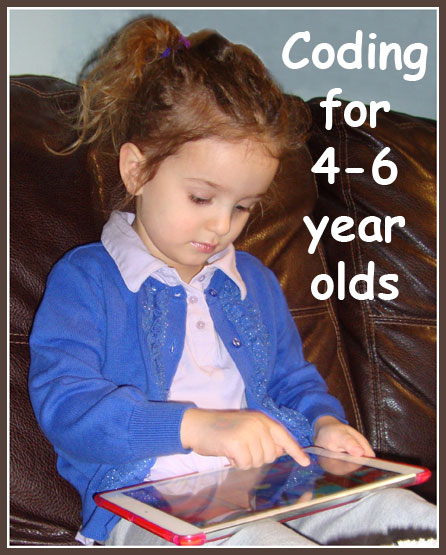 I haven't done coding with my girls yet, though I think they might enjoy it.

My 7 year old announced he wanted to learn how to code. Ok cool? I have no idea. Lol. We got the book Coding for Dummies (that came with a free coding program) and it was amazingly awesome. I will have to check out the resources you provided. Thanks for all the info.

Wow, I had no idea. I have shared this information for those with younger kids, thank you for sharing on Together We Blog.

These are great recommendations - I can't wait to try them with my daughter!

Thanks for sharing at Totally Terrific Tuesday! Pinned! This is some great info!! Have a Happy New Year!! Jess