Welcome back to our number bonds worksheets series.  This week I wanted to concentrate on mastering what has already been learned before we move on to the number ten.  So we will review number bonds 1 to 9. 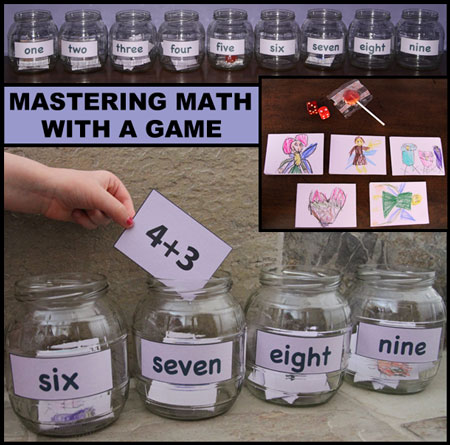 If you don’t count 0+0, the amount of simple addition equations learned so far is 54.  It just so happens that 54 is the amount of cards in a typical card deck, if you’re counting the jokers.  So I came up with a simple game that changes things up a bit, but is a great way for kids to master those equations.  I made a 54 count card deck except each card has one of the math questions on it.

To mix in a little bit of art with math, I made the size of each card 2 1/2″ by 3 1/2″, the same size as Artist Trading Cards.  I printed the cards on letter size card stock, and cut all the cards out until I had all 54 of them.  Then I let my daughter do some art on the back of some of the cards.

Using Pinterest as an education tool, I showed her what Artist Trading Cards (ATC’s) are, and we looked at quite a few examples of others art work.  We saw how often there was a theme, and the artist did each card a little different but following the same theme.

The first theme she wanted to do was “fairies” – several of them are now decorated with fairies.  Later a few others had ponies drawn on them, and then later hearts with designs in them.  There are still a lot of cards to do but we’re not in a rush.  Everyday as she feels like she will do another few cards.

Back to mastering math, I found 9 jars that had a hole big enough to fit a hand in, and glued a label with a number on each jar.  Each number was only in words.  For example, “one”, “two”, all the way to “nine”.  I lined up the jars, gave my daughter the card deck and told her to drop each card in the jar with the correct number.  So if she had a 2+2 card, she would drop that in the “four” jar.

It didn’t take her long to drop all 54 cards in the jars.

One rule I had to make after I saw my daughter play the first time.  I told her the cards would stay face down and she was only to flip one card at a time.  Otherwise she was saving time by finding matching cards to drop in at the same time, like 5+2 and 2+5.

Some Variations to Keep it Interesting

Treat or Surprise to Win

Each time she played, I changed the rules a little to make it interesting.  Several times after her cards were dropped, I put a treat of some kind in one of the jars.

The first treat was a lollipop.  Later, I put in a sticker.  So many stickers equals another treat.  It doesn’t really matter what the surprise is, she has fun trying to win it.

To add a little probability into the mix, I took 2 dice, and told her to roll them.  She had to tell me the total of the dice (which added another math question in there).  Whatever the answer, I put a treat in that jar.  Then when we were going through the cards of each jar, when we got to the jar with the treat, if she got all the cards correct in that jar, she could have the treat.

I figure after a while, she will connect the dots that certain jars get treats in them more than other jars.  All the more motivating for her to want to have mastered the number bonds of 6 as an example.

Sometimes, I divide the cards up into “levels”.

Level 1 will be all the cards that have a zero in them or a 1.  For example “1+6” or “4+0”.  My daughter knows how to add one to a number, and she knows zero added to any number will be the number.  So these cards are easy for her.  There are 33 level 1 cards.  I will probably remove them from the deck shortly because I think she will start to get bored since the questions are so easy.  That will leave 21 cards of good math practice.

Level 3 could be the cards that have 5 as an addend.  For example, 5+2, 5+3, 5+4, and the reverse.  I sometimes remind her that she could picture this question on the abacus.  I might say, what if you bring down a 5 on the abacus, and then bring up 4 ones, what number would that be?  She knows the numbers on the abacus, so that reminder helps her with these questions.

I might also relate it to the hands.  She knows each hand has 5 fingers but sometimes I find her counting the fingers.  So although she gets these level 3 questions right, I feel they need to come more second nature, so I will definitely keep these cards in the game.

For more practice on Adding 2 or Adding 3, I created this one page printable.  You can download a free copy here.

If you would like to play this game with your child, I have all the math equation cards and labels for the jars that you can download free here.

This game brings lots of great practice, and would be great for young children as there is no writing involved, and you can keep game play as short as you like.  If you have the jars set up, instead of giving them the whole deck to play with, you could just give them one card every while to drop in a jar.  That way, even if they don’t have a long attention span, they still can practice math.

I plan on continuing this game with my daughter all the way up to 20.  I will get a tenth jar, and use the other side of the jars to add 11 – 20 labels.  I will print the math cards in a different colour card stock for 11 – 20 so it will be easy to see which number of the jar it was meant for.

Have fun playing, and next week we’ll be starting the all important number 10. 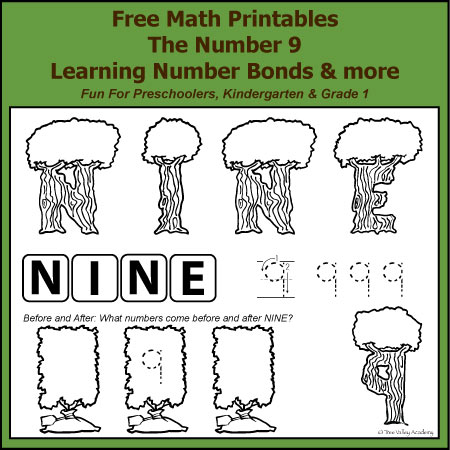 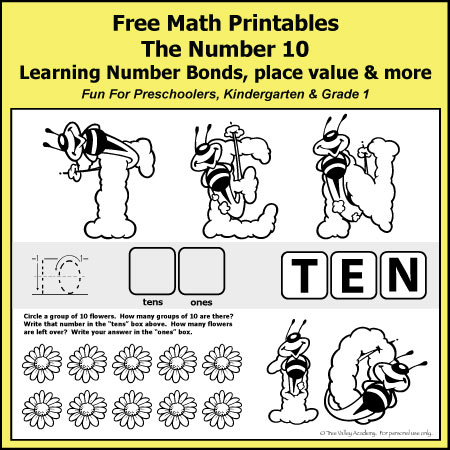 We love math games! Thanks for sharing at the Thoughtful Spot Weekly Blog Hop! We hope you join us again next week!

Thanks for sharing at our FB Share Day! I love when kids are learning and don't even realize it cause of the fun involved just like with these activities!

I really like this idea. I found your blog from the Thoughtful Spot Blog Hop and I am going to go back and look at your other math pages. Our 14 year old has aspergers syndrome and is super advanced in geography and learning Russian but is terribly behind in math. Plus he has a lot of small motor problems. I may adapt some of your ideas to multiplication tables since he doesn't know them yet. Our youngest, 9 years old, is developmentally delayed and these would be perfect for him. Thank you so much for sharing.

This is going to be so great when I prepare for summer vacation. Pinning and sharing. Thanks for sharing this at Totally Terrific Tuesday last week! I can't wait to see what you have lined up for this week! Our party is live right now!